A work from Karolina Savolt’s Wonders of the Universe series.

Open for viewing at the newly-opened gallery in Al Khayat Art Avenue, Al Quoz Industrial 1, the newest Cultural District of Dubai, “Karolina’s Universe” is a 20-minute immersive projection experience that allows visitors to step into the imaginary living room, where the young artist’s paintings were created. The show features a virtual walkthrough of her art studio and an escape to an imagined fantasy world depicted in her oil paintings.

The eight individual artworks that come to life reflect the emerging artist’s signature style, which includes feminine characters, fairy-tale-like animals, geometric patterns, and vibrant colours. The show narrates a tale inspired by the art and is accompanied by a musical score by the world-renowned contemporary pianist, Balazs Havasi. (Havasi is a Hungarian pianist and composer. As a contemporary composer, he has founded four different musical projects, including compositions for a symphony orchestra, rock drums, and piano). 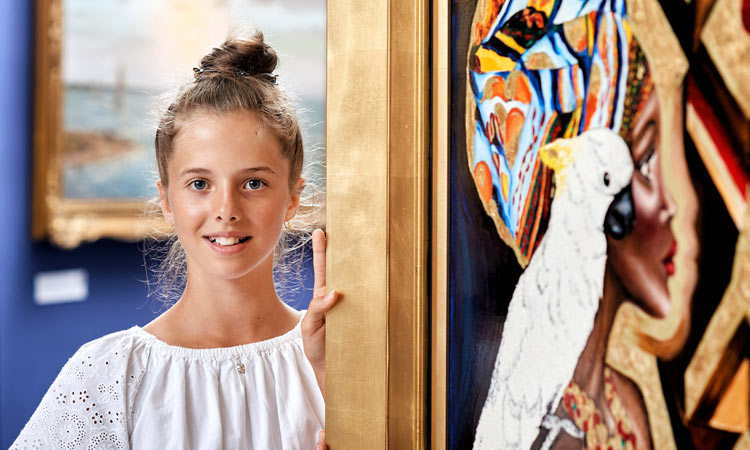 Karolina Savolt beside one of her works.

One of the youngest recognised painters of our time — or any time — Savolt, was born in Budapest, Hungary, in 2010. She says: “I believed it is crucial to emphasise environmental and animal conservation through my art from a young age; which is why these motifs frequently appear in my works.

“This collaboration with kanvas allowed me to recreate my work and present them in a different form. Video projection is a fantastic medium for showcasing my artwork to today’s tech-obsessed youth and providing older viewers with a window into the fantasy life of a young adult like me.”

Savolt is a self-taught artist and her works are bought for millions. Her magical realist style, which she says comes both naturally and is the result of planned execution, has won her wide recognition. Mutual acceptance, environmental protection and caring for animals and birds, are some of the subjects she deals with. Since she has not formally studied art, many kinds of styles inform her work.

But 15-16th century painters are her favourites. Her compositions have been noted for their positivity, especially through their colour schemes. How do artists show astonishing results even when they have not quite cut their art teeth? The answer perhaps is blowing in the artistic winds.

Albrecht Durer created a Self-portrait at Thirteen; in his adult years he revolutionised printmaking and was the most significant German artist of the Renaissance. Paul Klee said that the works he created between ages 3-10 were the most important he made. He always prized children’s art and used to copy his son’s sketches into his mature works, to create the “unstudied effect.” Salvador Dali created his Landscape of Figueres between ages 6-10 – on the back of a blank postcard.

He grew up into a fascinating Surrealist. Pablo Picasso composed The Picador when he was eight, before he began formal art lessons. The work is a clear indication of his inborn genius. It was he who said that “every child is an artist. The problem is how to remain an artist once we grow up.” Edward Hopper, who has influenced artists such as Wilem de Kooning and Mark Rothko, began drawing when he was five.

One of his drawings was discovered on the back of his third grade report card. Michelangelo’s extraordinary talent was apparent as early as when he was 12 or 13. And so on, to Savolt. kanvas is an innovative hub that combines art and cutting-edge audio-visual technology, exploring a multi-sensory dimension that adds to Dubai’s thriving art scene. A multifunctional gallery and incubator, it presents a wide range of artistic mediums, including traditional and digital artworks, NFTs, immersive and generative art, video mapping, and interactive and experiential designs.

It is located on a 200 square metres open planned space that serves both as an art gallery and an artist’s workshop, showcasing artworks that were formed in a world where “imagination meets reality”. The creative work of kanvas’ artists is supported by state-of-the-art digital technologies, striving to shape a new and alternative perspective to traditional galleries.

The visionaries of kanvas are experienced developers, engineers and creative thinkers, whose ideas have been changing along with the evolution of interactive technologies in the past years. Balint Tordai from kanvas said: “Our goal is to make digitally-created art as close to the real version as possible. We’re dedicated to helping the creative community develop ingenious strategies that immerse people in a variety of sensory experiences.” kanvas also runs multi-disciplinary art and event experiences throughout the year.

A couple of events in the pipeline include “Art in Light” running this month. It is a children’s workshop designed to turn an overhead projector, an outdated piece of technology that has been stashed away and forgotten, into an instrument of discovery and imagination.

Starting in November, “Lighthouse in Dubai,” curated by world-renowned 3D, video mapping and light artist Laszlo Zsolt Bordos, will showcase the work of visual and light artists, whose pieces represent change and changeability. The installations include a fusion of digital and analog components, reflecting surfaces made of tangible materials, and the play of light on these elements.