At the height of the pandemic, Geometry Ogilvy Japan recreated the world-famous Halloween event held annually in the centre of the Shibuya district, turning it into an alternative metaverse space. The new entertainment experience brought people around the world together virtually instead of physically and built an evergreen property that continues to grow commercially in scale and impact.

Taking a look back at the success of ‘Virtual Shibuya’ Halloween 2021 and ahead to this year’s event, LBB speaks to Yasushi Arikawa, head of creative experience, and Takuya Murakami, group account director at the Japanese agency to get an insight into the creative process behind this alternative Halloween celebration.

The Shibuya district in Tokyo is the cultural centre of Japan’s youth. They go to Shibuya to enjoy shopping and experience the music, fashion, and street culture that is born in this city.

The city’s signature event is Shibuya’s Halloween, when young people from all over Japan gather there in costume at the end of October to meet and enjoy the sense of togetherness that this huge event brings. While the Halloween event is not officially sanctioned or sponsored by the Shibuya Ward Office, it continues to grow in scale as young people gather in costume annually, with attendance estimated to be as high as one million people. The event is covered on TV news and across various online and print publications as an annual Halloween tradition.

This event became a problem in 2020 though due to covid-19. With a global pandemic underway, we knew that in-person visitors needed to be curbed to avoid widespread infection.

Introducing ‘Virtual Shibuya’ – a Halloween event in Shibuya created entirely in the Metaverse. The virtual event offered partygoers the opportunity to walk the streets of Shibuya, participating in the Halloween festival in Shibuya’s virtual twin – from the safety and comfort of their homes, all without losing the charm of the traditional in-person Halloween event and experience. 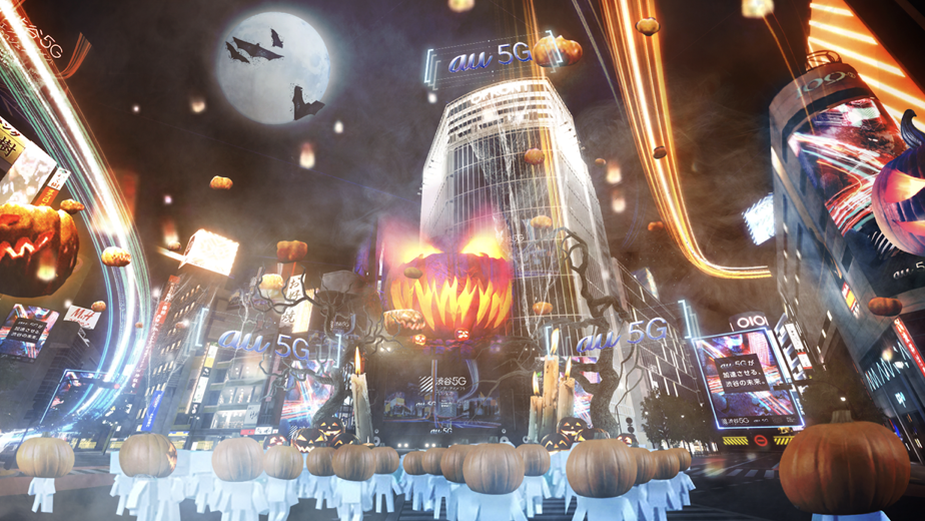 In 2020, covid was raging, and the world was asked to make spontaneous decisions and respond to these issues. Shibuya made no exception and called for the curbing of people’s visits to the city for Halloween. This meant controlling one million visitors.

Together with Japanese telecommunications company KDDI, Shibuya Future Design, and Play! Diversity Shibuya, a town association designing tourism and culture projects for Shibuya Ward, we launched ‘Virtual Shibuya’ – a metaverse officially recognised by Shibuya and used to solve the problem of visitor suppression for Halloween in Shibuya.

Virtual Shibuya Halloween was designed to provide an entertainment experience comparable to a real Halloween event. It was all about entertaining Halloween virtually, not in real life – with the catchphrase ‘Stay Virtual’.

The ‘world’ was an area centred on the scramble crossing (the central location of Shibuya), where elaborate spaces were created. The streets, objects, and pavilions were all designed to represent a Halloween atmosphere.

To add to the real feel of Shibuya, photogrammetry was used, photographing actual buildings and mapping them onto 3D objects to recreate the streets block by block. Within this world, a stage hosting live music and talk shows was created, along with a ‘Game’ world where games could be played; stores for purchasing merchandise and even photo spots were created and made accessible to all.

The event itself was similar to experiencing a walk through the streets of Shibuya. In this virtual reality, people entered as avatars, able to enjoy live music and talk shows designed by various creators, influencers, and artists. Avatars were able to play Halloween games and quizzes, and even win tickets for actual doughnuts and sweets! Visitors enjoyed diverse entertainment, such as trick-or-treat hunting, avatar cosplay contests, and fan meetings. The game was entirely designed to be enjoyed as if you were walking through an actual city, accessing various event venues and pavilions, while also being able to communicate with other avatars and make friends. 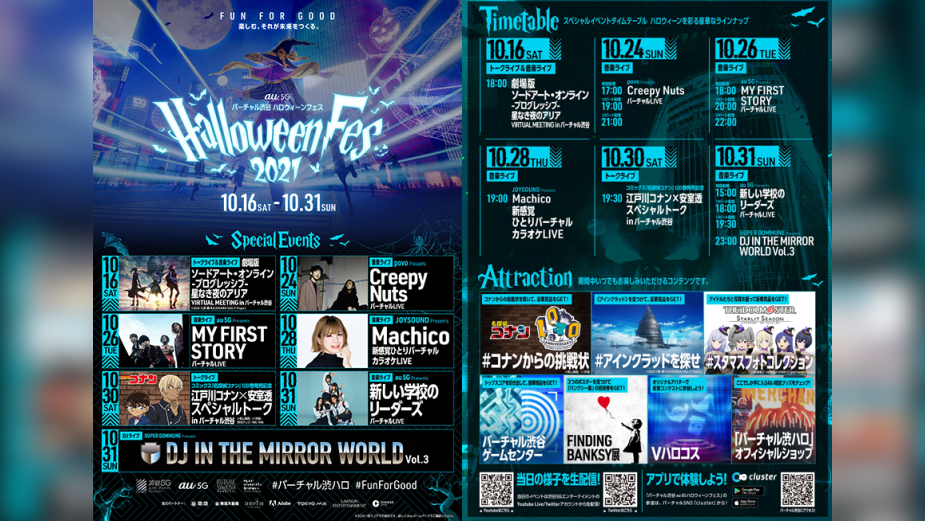 The design of this Halloween event was fraught with difficulties. First was the actual capacity issue. Designing the 3D object capacity and content to run smoothly when letting people access the event from their smartphone apps was difficult. To allow that many people to connect simultaneously, we designed the servers to distribute the traffic, but even so, we were apprehensive about whether they would remain stable or not. We also struggled with the number of simultaneous avatar connections and displays. Even if the number of participants increased, displaying 25 avatars in the same room was the limit of the hardware specs at the time. So, we struggled with how to make the event look exciting. There were daily online meetings with the tech team, client, and art director to make adjustments. And working as one team, we were able to make decisions and remain agile.

The Virtual Shibuya Halloween was programmed with content from multiple sponsors, partners and performances by various artists. The scale of this content production differed from regular client work though and instead was like running a live music festival. We had to make numerous changes in how we designed the event program and devised ways to make the live artist performances look good. We also went through a series of trials and errors to verify the photography techniques for filming. To make it look like a live performance, we designed space in unity and repeated simulations when filming the live sound recording. 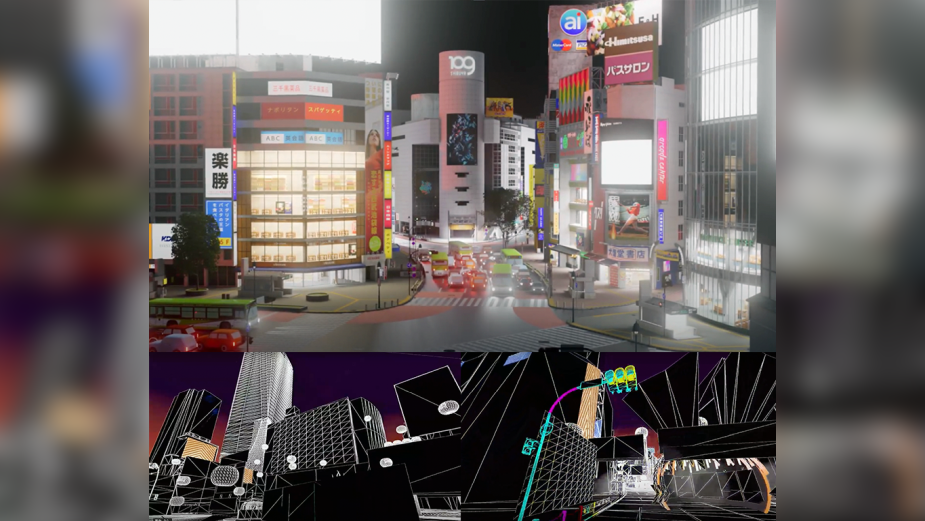 Metaverse as the Centrepiece

Before the Halloween event, the mayor of Shibuya Ward held a press conference in mid-September calling on people not to come to Shibuya for Halloween. Instead, he asked people to ‘Stay Virtual’ by enjoying a Virtual Shibuya Halloween. The city’s approach, which proposed celebrating in a different way that year instead of cancelling or postponing, was received favourably and quickly picked up by media. Through a single press release, the event received huge media exposure without an advertising budget – definitely one of the project’s successes.

Creating Buzz as a New Experience: 500,000+ Visitors and 2 Billion Yen in Media Exposure

The news that the government had used this metaverse event was a hot topic, and provided increased interest in this latest technology. The news spread quickly – including that the event produced ¥2 billion in coverage and avoided a crowded Shibuya. At the same time, it contributed to the city’s value, ultimately winning a Webby Award and a national XR Award. 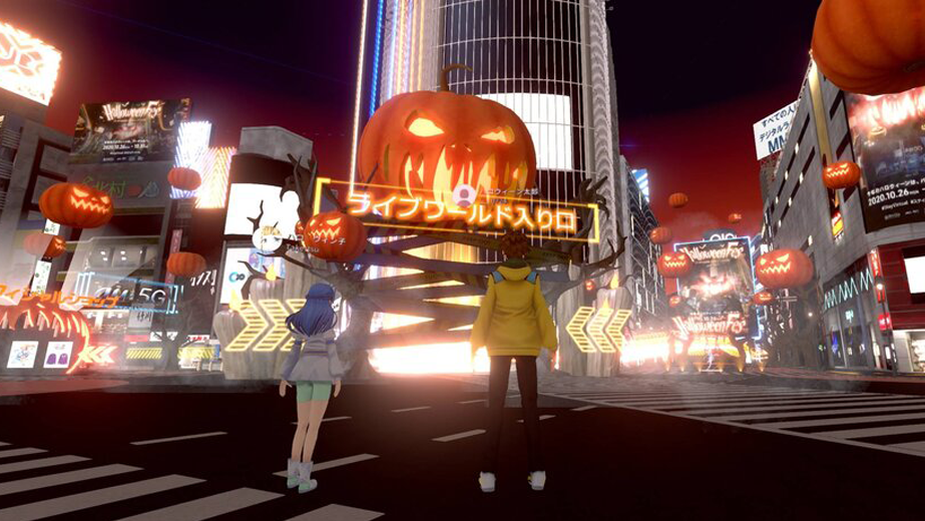 Unfortunately, past Halloween events in the city had brought about a bad image – with young people running amok in chaos and garbage strewn about the city. In contrast, the Shibuya Halloween in the metaverse brought about a good side to the event. Not affected by location or distance, the virtual event could accept a diverse range of people. As avatars, everyone is accepted – regardless of gender or appearance!  For a city that has declared that differences can make a city attractive, the metaverse has opened up a whole new realm of diversity.

The evolution of Halloween into a festival that aids various societal issues has become socially significant.  Proceeds from both the event and its merchandise have been donated to Kids Table, which supports neighbourhood education in Shibuya.

From Event Space to Communication Space

Since its inception in 2020, the Virtual Shibuya Halloween has been held annually with its third year to be marked this month. The event continues to update functionality – and is scheduled to be updated for the web3 era, evolving from the traditional event space type of metaverse into a communication space where individuals, such as the town’s residents, take the leading role.