I’m turning the key in the lock of my new one-bed terrace at 5 Angel Way. But there are no neighbours, birds chirping, no clouds.

My “house” is in Meta-Town, a British addition to the metaverse and which launches on Friday.

The metaverse is the “new internet” where you go about your day as an avatar in virtual worlds usually using a VR headset.

MetaTown digital world has shops, an underground station and even minigolf.

Some say this is the future of human interaction, with technology allowing colleagues thousands of miles away to conduct meetings and families to catch up with relatives. There is also the potential to make money.

To enter MetaTown, you simply type in a website URL, making it far more appealing to the less techy.

After logging on with my name and email, I made a digital me. The options are restricted to hair, skin, eye colour and clothes. But in the future they could be lifelike holograms. 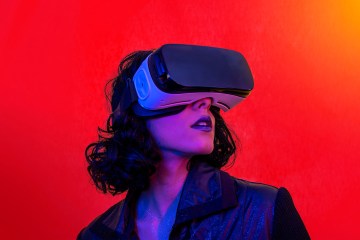 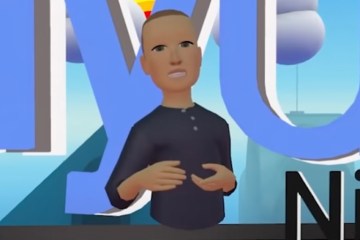 I start in this virtual world in the middle of MetaTown’s commercial heart, with its grass square, a stage at one end and the mini golf at the other. Shops surrounded me.

This virtual neighbourhood is designed by Welsh tech company BrandLab360, which developed such experiences for fashion brands and saw the potential in building a whole community.

It is the brainchild of Jennifer Drury and Dan O’Connell. Jennifer said: “You can bring friends from across the globe together and spend time in this world. You could shop together, watch a concert.

“There’s a connectivity to it, a sense of community that you don’t get from typical websites.”

There is also a feeling that there’s cash to be made.

Billions are now being invested in the creation of such worlds by tech giants such as Microsoft’s Bill Gates and Mark Zuckerberg, chief executive of Facebook, now renamed Meta.

And punters see it as an investment opportunity too, hoping a house bought for £1,000 now could be worth far more as the popularity of these virtual worlds grow.

Handbags or cars bought in the metaverse could also appreciate in value. VR consumer expert Dr Alena Kostyk, a lecturer at Glasgow University, explains: “With metaverse purchases the idea is that tech companies are trying to create a sense of rarity, of prestige. The idea is that these things, a house or otherwise, could become sought after and rise in price.

“But just because something is scarce doesn’t mean it’s always sought. Beanie Babies were a limited-edition toy predicted to rise in value. People bought into the craze but they never made any money.”

I feel a bit out of depth using virtual money to buy NFTs – digital assets such as my house or an item of clothing.

I follow instructions to set up a metaverse bank account. I then buy the cryptocurrency with my debit card. I am then able to buy my virtual property, which is neutral and pristine.

My avatar can hover a cursor over colour palettes on the walls and furniture to change their colours.

There is a study, a small bathroom and a spacious double bedroom also with an option to change the patterns and colour of the sheets.

It’s like playing with a dolls’ house but on the internet.

MetaTown has 6,000 plots up for grabs. So far 500 have been sold for roughly £1,000 worth of NFTs, mainly to people within the tech industry.

There will be nearly 50 virtual shops, with plans for 500 by the end of the year.

Luxury brands have been quick to spot the money-making opportunities these worlds offer.

Last May, Gucci marketed digital “spaces” in an online Gucci Garden so users could “try on” and buy limited-edition digital clothes.

Brands including Ralph Lauren, Nike and Balenciaga, which has hired a “chief metaverse officer” to develop a virtual clothing line, are in on the action too.

Two leading UK supermarkets and two from Europe are in talks with MetaTown, and Estee Lauder and Deloitte have signed up for virtual spaces.

My avatar potters into an Estee Lauder store, Maison Too Faced, and I’m impressed. It has a heavenly garden, with pink bunnies bouncing around.

There are games to play so you can win discounts and giant-sized roducts to click on which direct you to the website to complete your purchase. In another clothes shop, Hula, you click on items you like and they are brought up on screen in 360-degree view.

But why would someone not just log on to Amazon or head to the shops?

Dr Kostyk says: “It depends on what sort of shopper you are and whether you are motivated by the pleasure of the experience or doing it more functionally.

“There’s a lot of research that says these kind of interactive, immersive features work much better for hedonistic shoppers. Some of it shows there is even a willingness for customers to pay higher prices.”

Inevitably there are concerns about safety, bullying and sexual behaviour. One user claimed their avatar was groped by another.

Meta has pledged to work on security, but worries are prevalent — particularly because users are predominantly young.

So would Dr Kostyk go on a shopping frenzy in the metaverse?

YOU can rub shoulders with stars in the metaverse.

American rapper Snoop Dogg joined The Sandbox Metaverse in 2021, right as his avatar, a virtual world that includes sprawling mansions and VIP gigs.

Paris Hilton hosted a digital New Year’s party. You can go on digital holidays and have digital pets.

By 2050 one expert has even predicted that one in five babies could be virtual.