The bonk (BONK) cryptocurrency, a Solana-based meme token, has soared in price following its launch last month and airdrop to a group of Solana non-fungible token (NFT) holders.

If you’re interested in BONK as an investment, you might want to know how many BONK coins are available on the market to buy. It is also important to know the identity of the largest holders and how many coins they control, as their actions to buy, sell or burn tokens can affect the price.

What is Bonk, how does it work, and how many BONK coins are there in circulation? In this article we look at the project and its biggest holders.

What is the BONK crypto token?

Launched on 25 December by an anonymous community development team, BONK is described as “the first Solana dog coin for the people” – a reference to the popular meme coins, such as dogecoin (DOGE), shiba inu (SHIB) and floki (FLOKI), that have developed from social media communities and are based on the Shiba Inu “doge” internet meme.

While those tokens run on their own blockchains, or on the Ethereum network, the bonk token runs on the Solana (SOL) blockchain.

Solana has seen many projects leave the network in the wake of the collapse of the FTX cryptocurrency exchange and sister company, quant trading firm Alameda Research, as FTX’s founder Sam Bankman-Fried had been a major solana backer. According to the Bonk project:

“The BONK contributors were tired of toxic ‘Alameda’ tokenomics and wanted to make a fun meme coin where everyone gets a fair shot. We aim to bring back liquidity to Solana [decentralised exchanges] DEXs.”

Several of the remaining NFT projects on Solana have already integrated bonk tokens for use as payment.

How many BONK coins are there?

How does bonk’s tokenomics model work and how many BONK coins are in circulation?

According to the project’s whitepaper – or bonkpaper as it calls it – the Bonk project intends to “benefit from lessons learned by preceding community coins”, and it also aims “to adopt their strengths while avoiding their weaknesses”.

“In particular, Bonk strives to provide superior distribution mechanics to its predecessors, by distributing coins to community members most likely to harness Bonk’s true utility. To that end, Bonk will airdrop a total of 50% of the entire supply (50 trillion tokens of the total 100 trillion) into fourdistinct groups.”

In total, Bonk’s supply of 100 trillion tokens is broken down as follows. 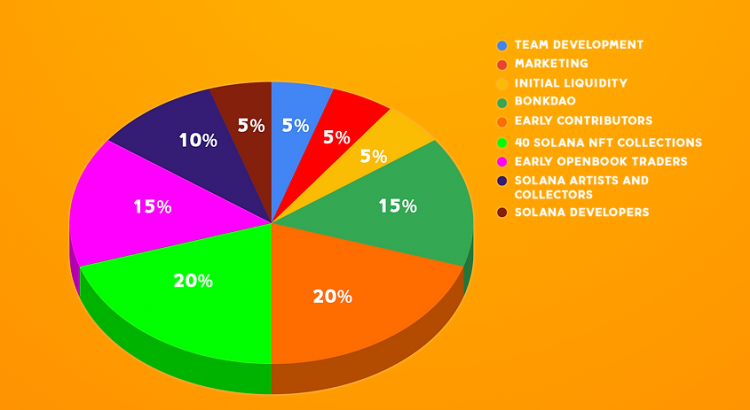 The breakdown of how the 100 trillion BONK will be distributed – Credit: Bonkcoin.com

How many BONK coins are available now?

There are currently 56 trillion BONK tokens in circulation in the world, according to CoinMarketCap data. And according to data analytics platform SolScan, the token’s supply totalled 94.15 trillion at the time of writing on 6 January. The token had a market capitalisation of $145.93m.

How many BONK coins are there among the largest wallets?

According to SolScan, the largest Bonk token holder at the time of writing is the Bonk MultiSig Wallet, which holds 15% of the supply, valued at more than $23.25m. The Bonk Treasury holds 9.5594%, valued at $13.95m. And the next largest wallet holds a total number of BONK coins of 4.425 trillion, equivalent to 4.7% of the supply.

After the BONK price fell on 5 January, the Bonk development team burned a total of five trillion tokens. Burning tokens permanently removes them from circulation, reducing supply, in an attempt to support the price.

$BONK represents the best of Solana. Our community is working together across the ecosystem to make positive change for all of us.

The 5 Trillion $BONK tokens allocated to “The Team” have been burned. pic.twitter.com/g7w62sdKhb

Some of the NFT artists and developers have also burned tokens after receiving their airdrops following the launch.

If you are considering investing in the new bonk token, we recommend that you do your own research to develop an informed view of the cryptocurrency market. Look at the latest market trends, news, technical and fundamental analysis, and expert opinion before making any investment decision. Keep in mind that past performance is no guarantee of future returns. And never trade money you cannot afford to lose.

There are currently no responses for this story.
Be the first to respond.