Review and Photos by Antiques and The Arts Weekly Laura Beach

NEW YORK CITY – The Winter Show. In Spring? And that was just the beginning.

As bad timing would have it, the post-Thanksgiving Omicron surge forced the belle of American antiques shows to find, in short order, new dates and a new venue, swapping late January in the Park Avenue Armory for April 1-10 at the former Barneys department store at 660 Madison Avenue at 61st Street. It is the kind of disruption we have come to think grudgingly of as “creative destruction,” with change, however uninvited, unleashing innovation.

In the case of the 68th Winter Show, owned by charity sponsor East Side House Settlement, innovation included a dramatic new floor plan and a refigured cast of roughly 60 exhibitors, many of whom juggled complicated demands on their schedules and inventory to be in New York. Citing conflicts, another nine exhibitors – most of them Americana dealers committed to the adjacent Philadelphia show – participated in the fair’s virtual component only. Programs were divided between January and April, some via video conference, others in person. A polished Winter Show website functioned better than ever, with vetted merchandise on display at Barneys also posted online. Dealers, demonstrating their increasingly sophisticated use of digital media and their expanding mailing lists, worked overtime to turn out clients.

Much credit goes to Winter Show executive director Helen Allen and her team for their swift action. As Allen explained of her hunt for a new venue, “We culled 20 possible places and were in close conversation with our dealers. Location was important. After we started talks with Barneys, I held a Zoom walk-through for exhibitors, who took a tremendous leap of faith to be here.” 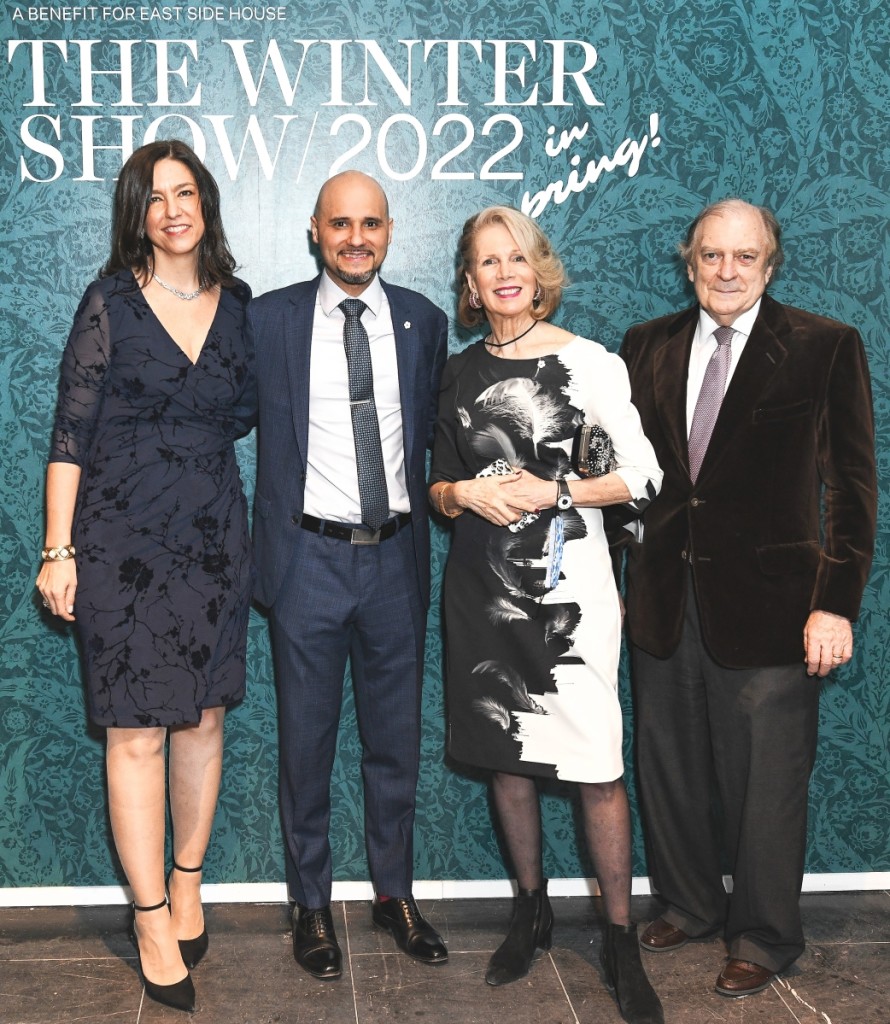 Allen and her colleagues had only eight weeks to design and build the Winter Show. “I had a very distinct idea of what the site needed to accomplish and how it should look. It was important for the fair to be dynamic and engaging, but also easy to navigate.”

Building the show entailed ripping out counters and shelves left behind by Barneys, patching walls and floors, painting, enhancing electrical systems and adding wireless internet service. Allen remarked, “It was a Herculean task to get this building in shape, but the results have been well received. The consensus is that the space is welcoming and inviting with lots of light, the galleries look spectacular, and there is good traffic flow. We learned as we went and tweaked as necessary.”

Spread over six floors, with one floor reserved for a spacious café and another for programs, the show featured booths of every size and shape. Visible from the fair’s entrance was the expansive stand of Bernard Goldberg, front and center with early Modern American art and design. 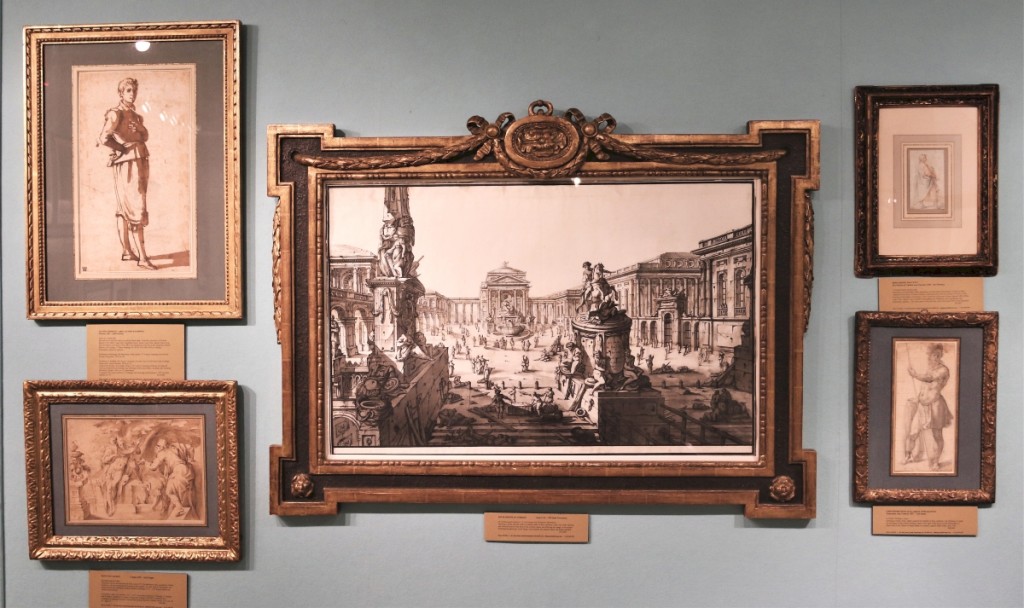 Centering this print wall is the ink and chalk drawing “An Architectural Capriccio: A Vast Forum with Sculptural Monuments” by Louis-Joseph Le Lorrain, first half of the Eighteenth Century. Hill-Stone, Inc., Dartmouth, Mass.

Joan Mirviss and Barbara Israel made clever use of the street-level windows in their stands, Israel using hers to display a cast iron figure of a kneeling boy with roosters in the manner of Paul Romain Chevre, a Belgian-born artist who completed several public monuments in Quebec. The garden antiques specialist sold a carved marble figure of Ceres, a cast iron retriever attributed to Wood & Perot of Philadelphia, plus furniture, urns, planters, finials and an armillary sphere.

Fresh from Asia Week and her March 16-April 22 gallery exhibit of work by contemporary ceramist Kondo Takahiro, whose remarkable porcelain pieces glisten with his signature “silver mist” glaze, Mirviss has been on a selling spree. Meanwhile, her Winter Show installation, “Kazari: Beyond Decoration,” explored the sophisticated patterning found in a range of Japanese art media. The New York dealer sold paintings, prints, porcelain and stoneware to a range of clients at the Winter Show.

Martin Levy, director of H. Blairman & Sons and chairman of the recently completed campaign to restore Kelmscott Manor, once home to William Morris, included in his varied display an 1890s embroidered silk hanging designed by J.H. Dearle for Morris & Co. Levy shared, “In addition to a constant round of catching up with friends and clients, good sales have been made from the show. These include a chair designed by Philip Webb, a stoneware vase designed by Mark Marshall for Doulton and a bowl by William De Morgan.” 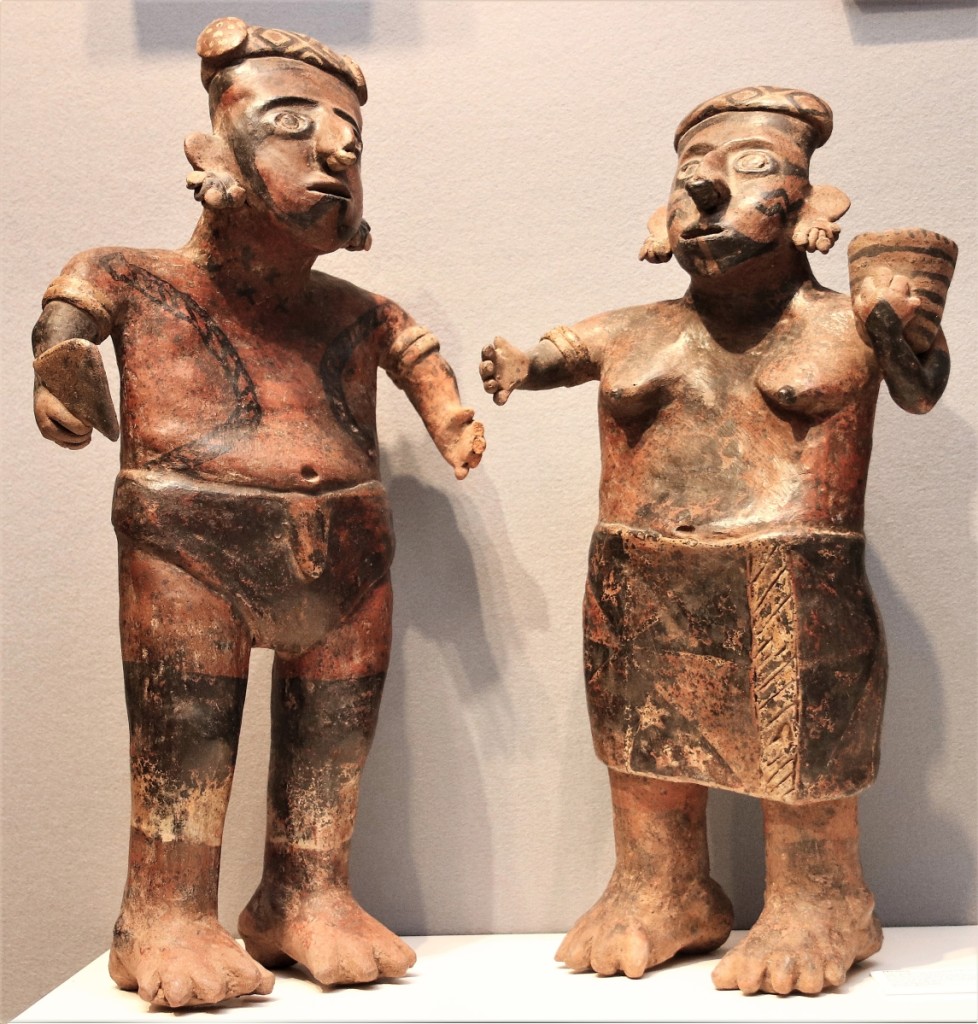 Old Masters pictures dealer Robert Simon was having his best Winter Show ever. His sales included “Torment of the Evil Tongues,” an arresting Spanish Colonial portrait of the devil, and an oil on copper painting of Salome by a rare woman artist of the Baroque era, Virginia Vezzi.

Peter Pap’s showpiece was a nearly 12-by-10-foot tapestry on a Nordic theme woven in 1903 with wool and silver thread by Norwegian artist Frida Hansen. Missing since it was last exhibited at the Brooklyn Museum in 1931, the textile surfaced in a New England collection in 2021. Pap said, “We’ve gotten a great response and are actively engaged with US and Norwegian museums regarding the tapestry.”

The fair’s only in-person dealers in American furniture were Hirschl & Adler and Bernard & S. Dean Levy, both of New York. At midweek, Frank Levy had on hold a Maryland Chippendale lowboy of circa 1765 and serious interest in a pair of Massachusetts or Rhode Island Queen Anne side chairs originally owned by Reverend Ebenezer Gay of Hingham, Mass.

Hirschl & Adler recreated elements of its signature Armory stand, using its many walls to show furniture by Duncan Phyfe and Thomas Seymour, and paintings by Childe Hassam, Edward Hopper and others. “It’s exciting to be here. So glad we took the risk. It’s been an upbeat and interested crowd,” managing director Elizabeth Feld said. 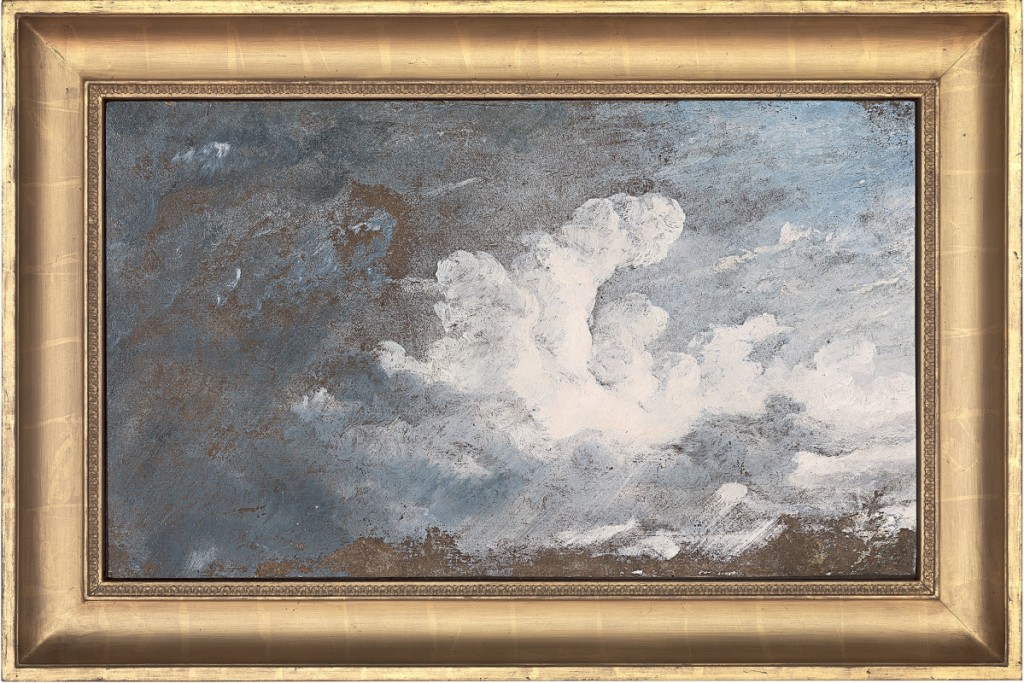 “Storm clouds over Hampstead” by John Constable, 1822. London dealers Lowell Lisbon and Jonny Yarker, Ltd., said of it, “this little-known example is one of the boldest, most dramatic and largest of the cloud studies to survive.”

“We are having a great show,” said Mark McHugh and Spencer Gordon. Specializing in American silver of the Nineteenth and early Twentieth Centuries, the Massachusetts dealers sold their most important pieces of Tiffany mixed-metal Japanesque silver, including a vase likely exhibited at the 1878 Paris Exposition and later owned by Tiffany silver head Edward C. Moore. They also wrote up a punchbowl with cups, ladle and undertray by Allan Adler and Porter Blanchard, circa 1950.

Two floors above, S.J. Shrubsole sold a range of English and American silver and had interest in a group of Montague Dawson paintings.

“It was a great location, and we did business. New people came through,” said Spencer Throckmorton, who contrasted pre-Columbian antiquities with a Nineteenth Century Dufour wallpaper panel in an Incan theme and Modernist photography.

Twenty exhibitors set up on the fourth floor, among them Lowell Libson and Jonny Yarker. The London dealers in blue-chip British art boasted a rare 1821 cloud painting by John Constable. Around the corner, Ronald Phillips Ltd wowed visitors with Eighteenth Century English mirrors, urns, wall lights, side tables, armchairs and commodes in sets of two and four. The London antiquary parted with a pair of George I gilt-gesso tables attributed to John Belchier and a set of four George III mahogany library armchairs, among other pieces.

Dutch Delft specialist Aronson of Amsterdam fashioned a stand well suited to its small, bright space. Robert Aronson noted, “We have made several sales so far to collectors, plus one to a museum.” 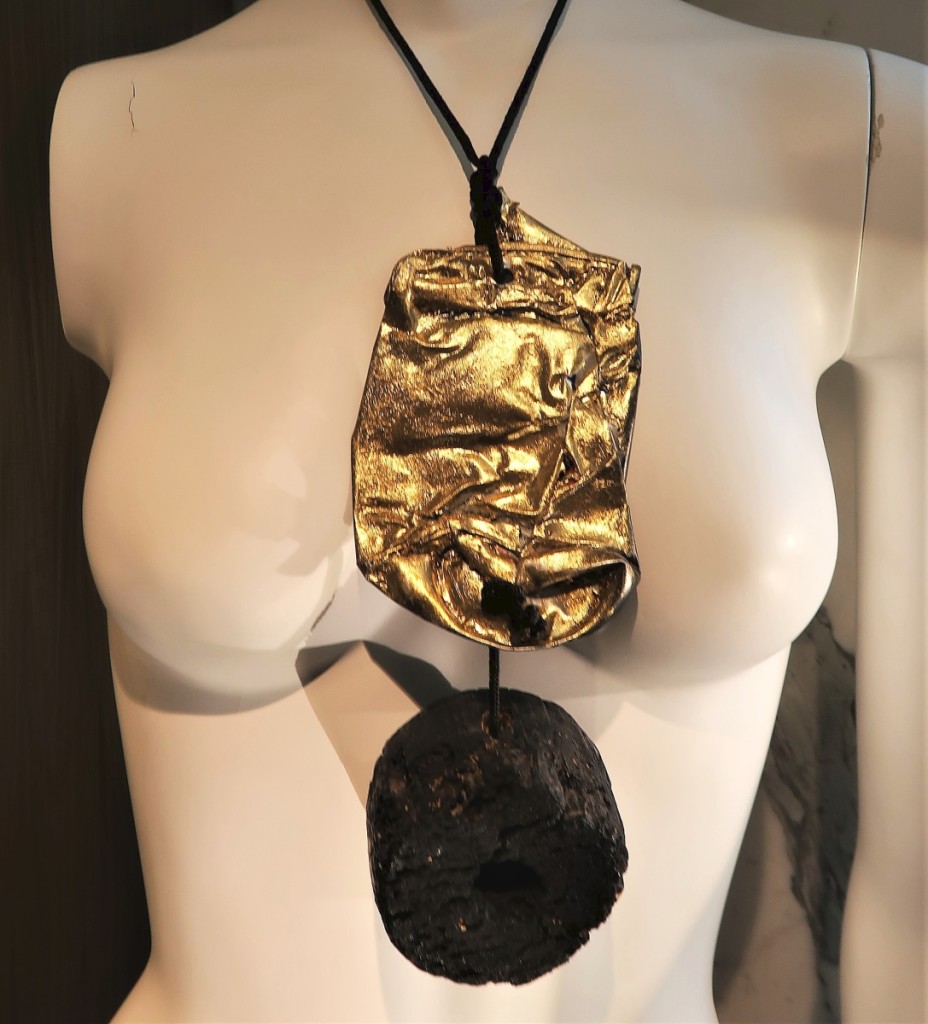 Didier Ltd. of London embraced the department-store concept, showing jewelry such as this necklace by sculptor Louise Nevelson on bare mannequins.

One of several jewelry exhibitors in the show, Kentshire wrapped up pieces by Cartier, Tiffany and an Art Deco diamond bracelet by René Boivin.

On the fifth floor, Michele Beiny and Maison Gerard used existing architecture to advantage, creating freestanding booths with transparent walls. Each ringed the exteriors of their displays with classic to contemporary ceramics, mostly European.

While the Winter Show expects to return to the Park Avenue Armory and its traditional January dates in 2023, this temporary move had its upsides. “People loved exploring this show, which was both open and intimate. And we didn’t have to worry about snow,” Allen said.

For more on the Winter Show, go to www.thewintershow.org.