Visitors gather around a miHoYo booth that was decorated with traditional Chinese architecture made popular in the game, Genshin Impact, at the Anime Expo in Los Angeles in July.

New technologies are taking people on a digital tour of China dating back about 1,000 years. They can “visit” water towns, “walk” through natural mountain landscapes and “make” lacquerware with rare shells.

Artificial intelligence, computing graphics and Metaverse, which are all cutting-edge technologies, are used to rebuild the time machine in games and virtual worlds. They give users the power to explore dreamlike artistic worlds and cross the lines between the real and virtual worlds.

It is the newest mix of technology and pop culture. It is called guofeng, which means “Chinese wind,” and it reflects people’s interest in history and culture.

Behind the machine are Shanghai-based developers, who have been endorsed by Apple’s top leader. In the gaming and AI fields, they include miHoYo, Coconut Island and SenseTime China.

The latest example is miHoYo, the developer of Genshin Impact.

In its upcoming release Honkai: Star Rail, players can go on a role-playing galactic adventure in several fantasy worlds. One world is called Xianzhou Luofu, which comes from a legend and means “floating boats.” Its buildings, weapons and clothes all have elements of Chinese culture. 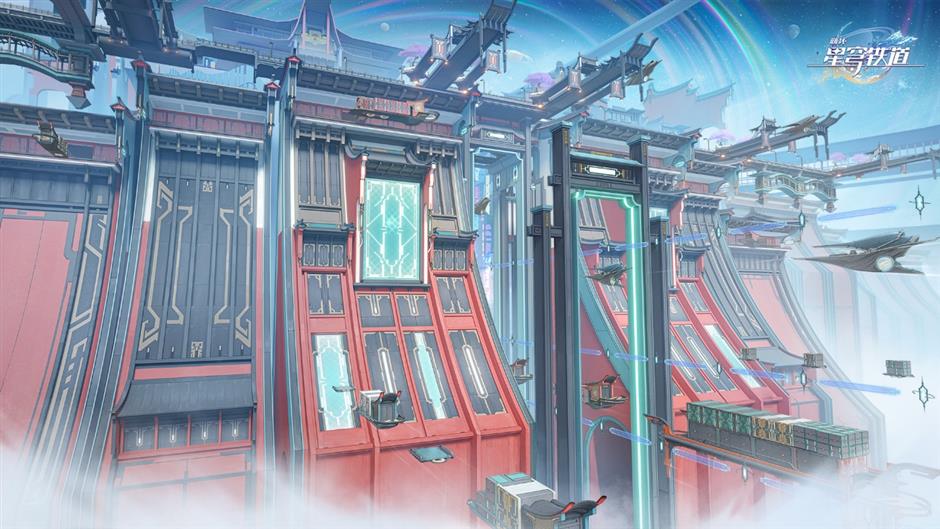 Based on a trailer, the spotlight is on a city wall with Chinese Wupeng boats with black canopies, lines derived from phoenix and animal face patterns used in ancient Chinese bronzes and dougong (斗拱), or bracket set.

A miHoYo designer told Shanghai Daily that the sword, spear and lion designs on the armor and chess board in the Xianzhou Luofu world are all based on Chinese culture and history. He called it “tradition meets sci-fi.”

In Genshin Impact, miHoYo introduces traditional Chinese architecture and promotes tourism by incorporating beautiful places like Zhangjiajie and Guilin. It blurs the line between the real world and the world of computers.

Founded in 2011 in a dormitory at Shanghai Jiao Tong University, miHoYo has grown and has more than 4,000 employees. The masterpiece Genshin Impact won both the App Store’s Game Awards 2020 and the Apple Design Awards 2021. It is one of the most downloaded Chinese mobile games in markets outside of China. In June, WWDC invited co-founder and president Liu Wei to go and talk with Apple’s CEO Tim Cook on behalf of Chinese developers.

A lacquer craft that was popular in China during the Ming Dynasty (1368–1644) has become popular again among young people today.

The Luodian lacquerware (螺钿漆器), or lacquer embellished with rare shells, gold and silver, was featured as a significant virtual item in the most recent version of the popular mobile simulation game “100 Scenes of Jiangnan.” The artifacts are illustrated by AI rendering technologies and endorsed by experts in ancient art. 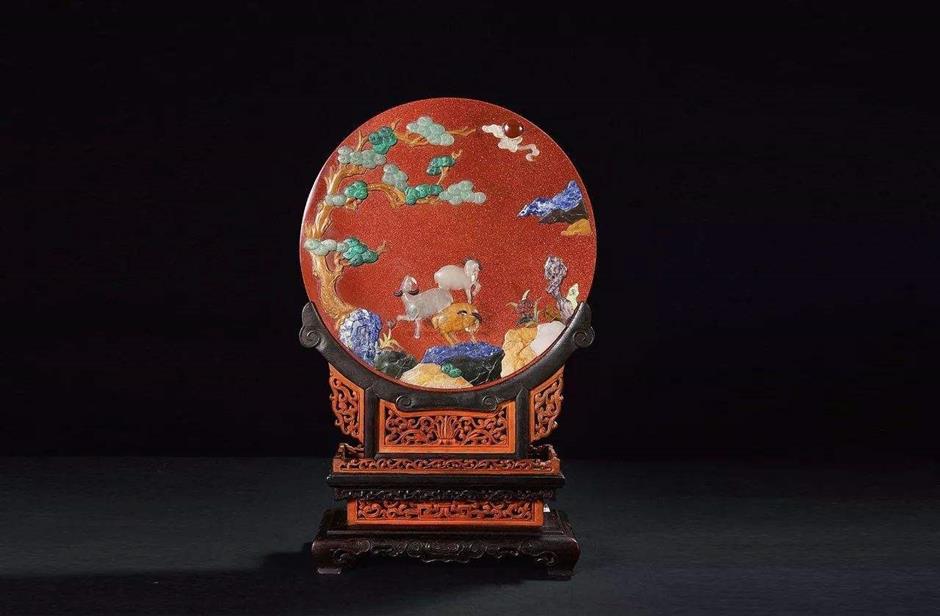 A Luodian lacquerware, or lacquer decorated with rare shells, gold and sliver, was popular in Ming Dynasty. The artwork appeared as a key virtual item in the popular mobile simulation game “100 Scenes of Jiangnan.”

The crafts appear to match those of the game’s debut two years ago, which constructed Ming Dynasty cities and water towns in Jiangnan, regions south of the Yangtze River’s lower reaches, including Shanghai. Characters from ancient China, such as painter Qiu Ying, artist Tang Bohu and government official Bao Zheng, play important roles in the game.

In the game, players are encouraged to create virtual Luodian lacquerware using design and imagination, while adhering to the color and expression matching habits of Ming Dynasty Luodian lacquerware. They can add figures, flowers and birds to lacquerware while also integrating and recreating the surrounding architectural styles.

Characters and crafts in the game are always popular and provoke a lot of conversation among young players, frequently in the form of traditional grandiose paintings. The game company has partnered with offline locations in Shanghai, Hangzhou and Yangzhou to cover Shanghai Yuyuan Garden. 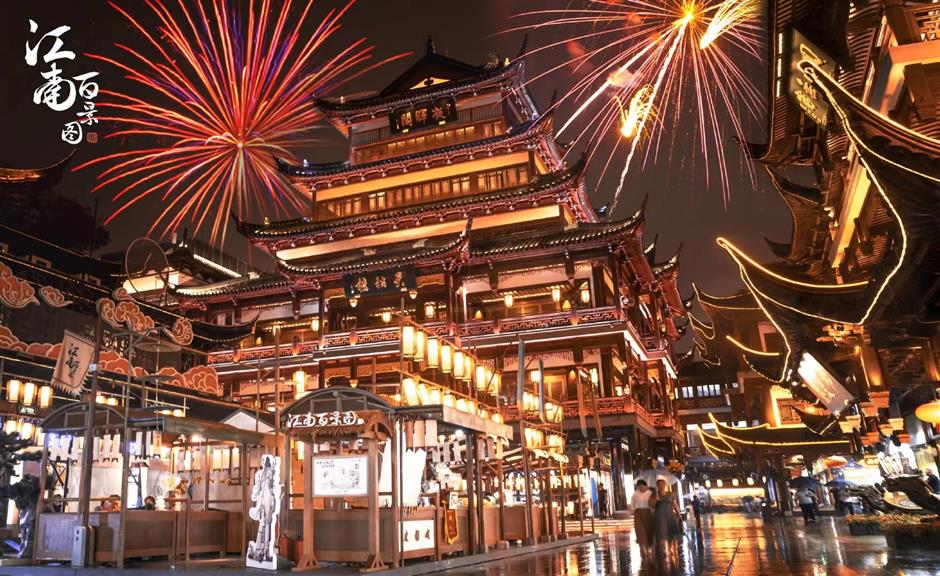 People visit Shanghai Yuyuan Garden with themes coming from a game that integrates the digital and real worlds.

Scholars have been exploring innovative ways to disseminate traditional Chinese culture among the younger generation. “Nowadays, the game is one of the most beneficial channels for introducing the aesthetics of Chinese culture and passing down traditions,” said Professor Zhang, who also works for the Shanghai History Museum and is an expert on ancient art restoration.

Shanghai has taken steps in recent years to strengthen the game and eSports industries, including attracting gaming and cultural firms, hosting major events, and expediting application and approval procedures for publications.

New format of national treasures with AR and AI

The majestic mountains and rivers of the Northern Song Dynasty (960-1127) are brought to life using augmented reality (AR) and artificial intelligence (AI) technologies.

SenseTime, based in Shanghai, just released a digital art rendition of Travelers Among Mountains and Streams. The artwork, by Northern Song artist Fan Kuan, is described as one of the “three treasures in the Taipei National Palace Museum,” and is undoubtedly a Chinese national treasure.

The digital art of Travelers Among Mountains and Streams, powered by SenseTime’s technologies, allows mobile users to explore natural landscapes as if they were “walking” inside, fully conveying the magnificent vista and the grandeur of mountain rocks and embracing the exceptional virtual artistic realm with an immersive experience, or “the metaverse,” according to the company.

The Travelers Among Mountains and Streams, a painting by Fan Kuan from Northern Song Dynasty, is now accessible with AR and AI techs.

It invites people to “rediscover history and contribute to the creation of a new digital cultural ecosystem,” according to Lee HanEing, chairman of LEE & LEE.

Meanwhile, SenseTime created digital artworks based on horses drawn by artist Xu Beihong and artworks from the Dunhuang Grotto, both of which are well-known in China.

It’s part of SenseTime’s ambition to expand into the metaverse, where they’ll use cutting-edge technology to construct a virtual environment that will generate billions of dollars in the real world in the future.

Shanghai wants to cultivate 10 leading metaverse firms with international competitiveness and over 100 iconic products and services by 2025, with a total industrial scale of 350 billion yuan (US$54 billion).